Welcome to nesto’s monthly mortgage trends and insights report, aka the nesto meter! Each month we’ll report on the state of the housing and mortgage industry. June 2022 mortgage report is centered on the rise in mortgage rates and the housing market potentially cooling off. Read on, and learn more!

Prices Down, Interest Rates Up, House Hacking on the Rise

The official start to summer is here, and with flowers rising from the ground, we, too, see other things rising in the housing industry this season: mortgage interest rates.

While we projected in our last nesto meter report that interest rate hikes would continue through the summer 2022, it’s now official, with the June 1st announcement that brought the overnight rate to 1.5%. Up from 1.0%.

So, what is the outcome of this rise in mortgage rates and subsequent increase in payments? Is it having an impact on cooling the housing market?

In short: Yes, early indicators from our data are showing symptoms of a hot housing market cooling down. From lower down payments, and house pricing declines….The signs are all there.

Read on and see exactly what the data story is telling. 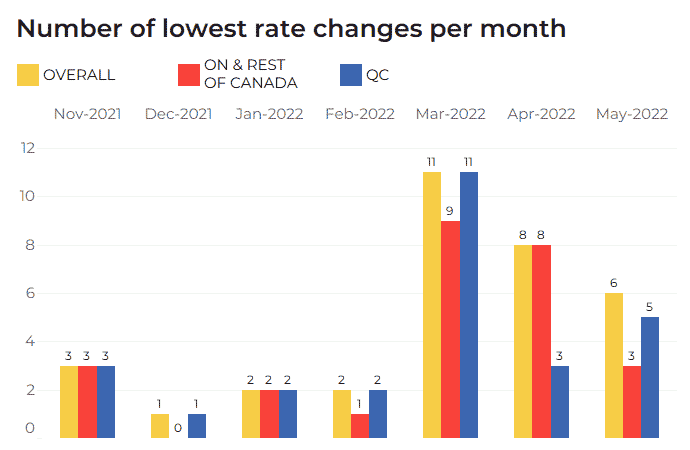 Fig. 1: Number of times the lowest rates offered by nesto to its users changed per month across provinces between November 2021 and May 2022.

Looking at rate changes from November 2021 through May 2022, it becomes clear that the impact of rising prime rates are reflected in the rates offered to users in the nesto database. As seen, prior to the aggressive 0.5% hike announcements that began in March 2022, the average rate changes per month were two; however, now they average between 5-8 per month. While May 2022’s average was slightly less than the 8 changes seen in April 2022, our projection is that this will increase yet again following the June 1, 2022 rate announcement. 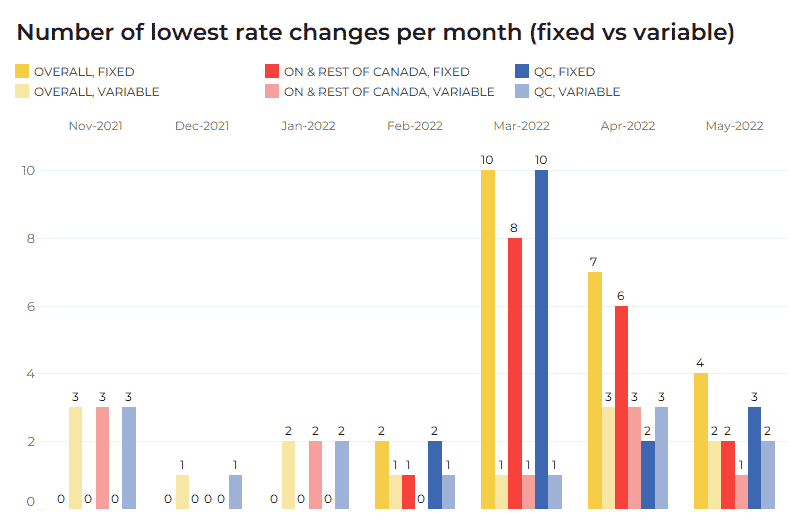 Fig. 2: Number of times the lowest rates offered by nesto to its users changed per month across provinces between November 2021 and May 2022 comparing fixed to variable rates. May 2022 showed fewer rate changes across the board between fixed and variable.

Overall, the graphs show what many in the industry already know: Fixed rates are due for continual increases, while variable rates will take a considerably longer time to get to such high levels. Yes, both are going up, but they are not moving at the same speed. For this reason, no matter the province you reside, variable rates are still a great option to keep mortgage payments low. 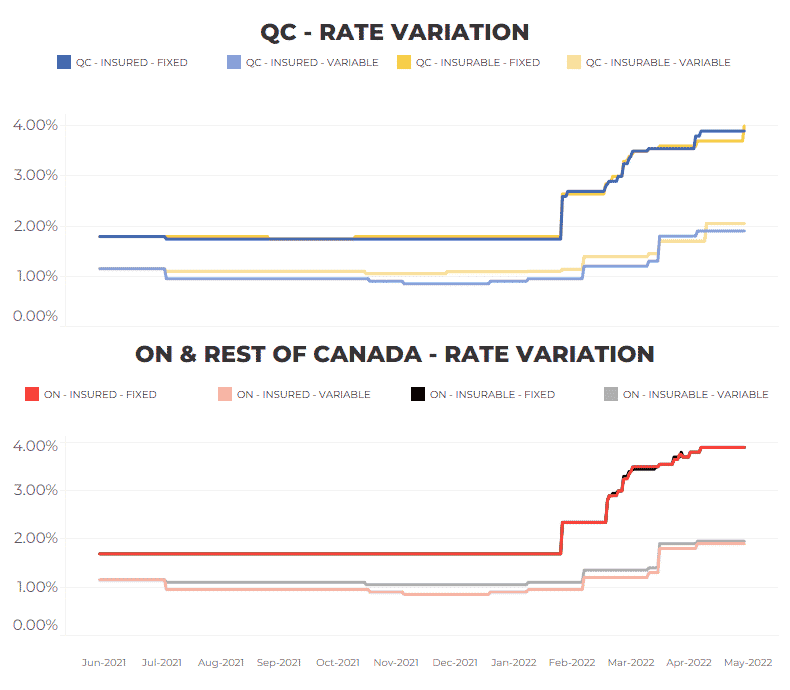 Fig. 3: These graphs show the rate variance in Quebec compared to Ontario and the rest of Canada.

Now let’s talk about variance! Fixed rates continue to rise at a faster pace than variables. This gap widened from March 2022 onwards ( >2% for fixed, and < 2.0% for variable) which is attributed to the interest rate hikes from the Bank of Canada. Additionally, it can be shown that the variable insurable in QC outpaced the variable insurable in ON just slightly, with it coming in above the 2.0% mark.

Rates are spiking, secure your low rate today to save tomorrow.

a. Purchase vs Renewal vs Refinance 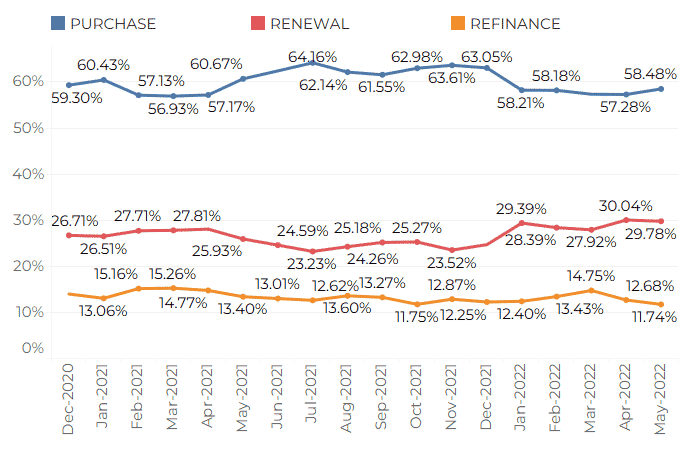 Fig. 4: Trends for proportion of purchases (new mortgages) vs renewals vs refinances from December 2020 to May 2022.
We saw a jump in renewals in January and April.

In our last report, we highlighted how renewals and refinances increased against demand for new purchases. We also noted how new purchases have begun a plateau across our database.

Looking at May 2022, comparatively, we see that while renewals are still higher than their standing at the start of 2022, they did fall slightly since April 2022. On the other hand, the highest peak that refinances experienced in March 2022, has seemingly passed, putting the percentage in the 11% range again.

Finally, on the new purchases front, the plateau has continued. While there was a 1% uptick, numbers have been in the same 57-58% range since rate hikes began this year.

Why could the change in renewals and refinancing be? Well, on the renewal front, people still want to lock in their best rates before they rise, so the continuously higher numbers in 2022 compared to 2021 make sense. As for refinances, the dip seen between April 2022 and May 2022 compared to April 2021 and May 2021 can be attributed to higher interest rates. Where people were ready to break their mortgage to refinance with a better rate, they may feel less inclined to now that rates continue to go up.

a. Purchase vs Renewal 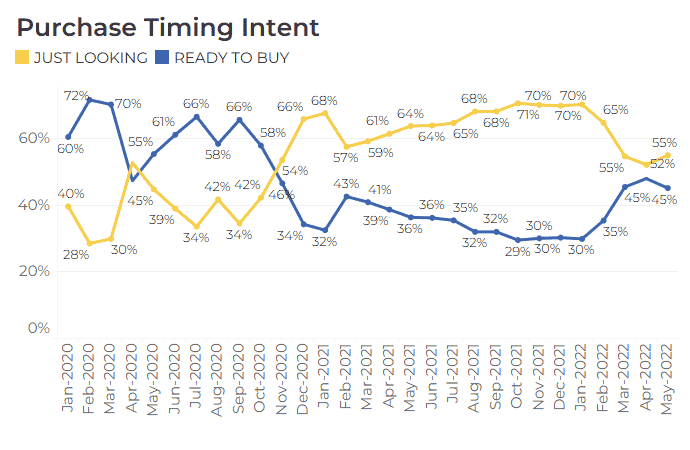 Fig. 5: Purchase intent: proportion of users “ready to buy” vs “just looking” in nesto’s mortgage process, showing month by month from January 2020 through May 2022.

Reported last month, in May 2022’s nesto meter, we saw a pretty noticeable shift occur between the “ready to purchase” and “just looking” parties. These two seemingly inverted, and met in the middle in an almost even split.

This speaks to buyer hesitancy increasing. Since home prices are still relatively high, and mortgage interest rates are at the highest point since pre-pandemic, it makes sense.

Fig. 6: Purchase timing intent proportion of users “ready to buy” vs “just looking” in nesto’s mortgage process, from January 2020 through May 2022 in Quebec and Ontario.

4. PROPERTY VALUE AND DOWN PAYMENT

As a result of the general financial uncertainty, our data shows a decrease in the targeted property value throughout confinement, but a much more pronounced decrease in the planned down payments. Due to 2020’s exclusive situation, the data and analysis for these elements are found in the next section of this report, as it covers the same period. 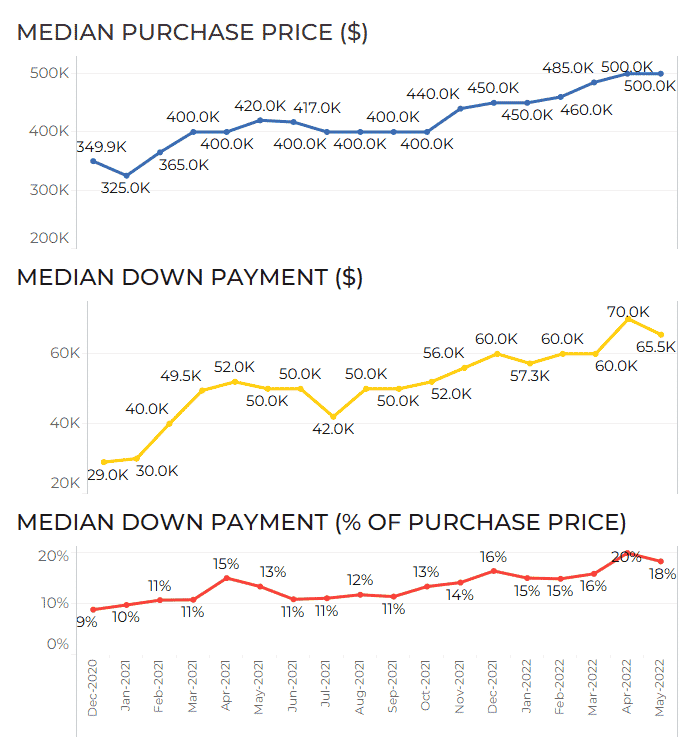 Fig. 7: This chart shows early indications of a cooling market, with down payments dropping by $5,000.

Looking at today’s data, and where the market stands; however, we’re seeing a bit of decline that could signal a cooling market. Instead of maintaining an average down payment of $70,000 or increasing further, the number dropped to $65,500. While only a few thousand dollars difference, this could speak to early signs of a less aggressive market – one where home prices aren’t accelerating month over month, and buyers don’t feel the need to outbid others to secure a home.

Hot nesto news: We also see this from our internal sales team who report that this past month, there has been an uptick in buyers being able to offer and secure below-market listing price. 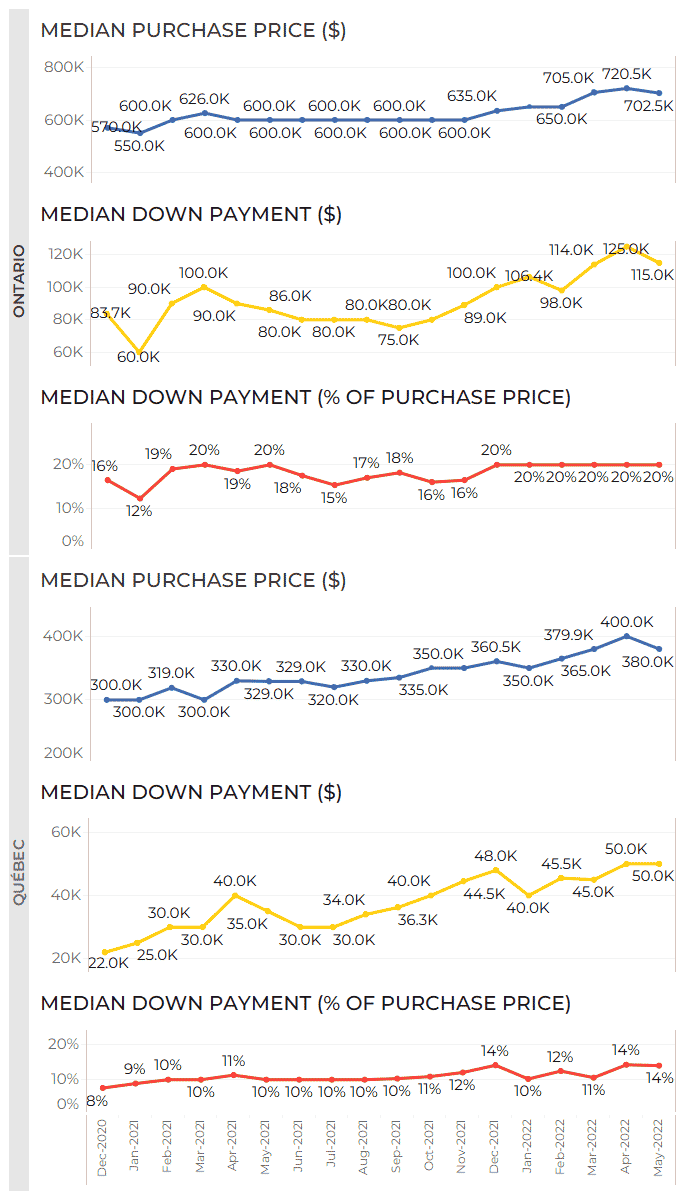 Fig. 8: Graph of intended purchase prices vs down payment (in dollars and percentage) from December 2020 through May 2022 in Ontario and Quebec.

What is the impact of the rate hike announcements?

Rate hikes undoubtedly shake up the market, and cause higher payments from higher interest rates in their wake. The best way to make sure you’re prepared? Foresight. Below we outline where the rates and payments stand today in light of the June 1, 2022 announcement and showcase the impact of the 0.5% hike. As it can be seen, when projecting over a 5 year period, if someone locked in their variable rate before June’s rate hike, they would have save thousands.

The data used for this study comes from nesto’s online application and is solely based on the experience of nesto.ca customers/users, not the national market as a whole.

Data is collected from thousands of monthly users declaring their intent or completing online applications across Canada. The data is anonymized and aggregated for analysis.

For press and research-related requests,
email us at media@nesto.ca.

Download below and get it sent directly to your inbox